Transfer from Cesky Krumlov to Salzburg 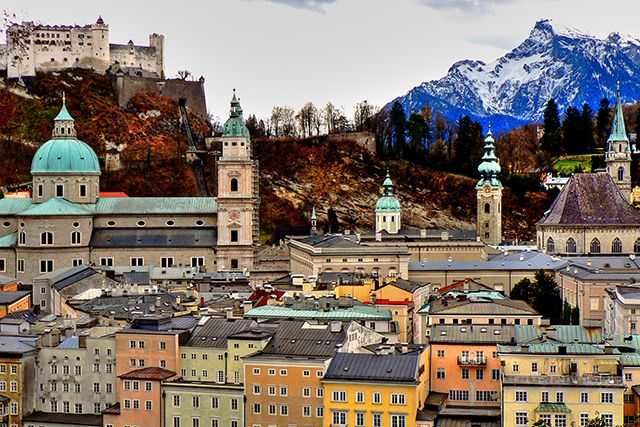 Salzburg ("Salt Fortress") is the fourth-largest city of Austria. The population of the city is 154 thousand. Salzburg is on the banks of the River Salzach, at the northern boundary of the Alps.

Its main sources of income were salt extraction and trade and, at times, gold mining. The fortress of Hohensalzburg, one of the largest medieval fortresses in Europe, dates from the 11th century. In the 17th century, Salzburg became a centre of the Counter-Reformation, where monasteries and numerous Baroque churches were built.

Salzburg's historic centre is thus renowned for its Baroque architecture and is one of the best-preserved city centres north of the Alps, with 27 churches. It was listed as a UNESCO World Heritage Site in 1996. The city has three universities and a large population of students. Tourists also visit Salzburg to tour the historic centre and the scenic Alpine surroundings. Salzburg was the birthplace of the 18th-century composer Wolfgang Amadeus Mozart. Because of its history, culture, and attractions, Salzburg has been labeled Austria's "most inspiring city."

In the 1960s, the movie The Sound of Music used some locations in and around Salzburg and the state of Salzburg.

The most important sights in Salzburg are the Hohensalzburg Fortress, the Mirabell Palace and Gardens, the Getreidegasse, the Hellbrunn Palace & Trick Fountains, the DomQuartier Salzburg, the Salzburg Museum Neue Residenz.